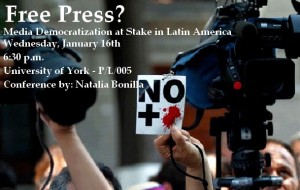 Usually they are called the ‘hot spots’ for journalists reporting on violence, corruption, drug trafficking or the State. But, how necessary is it to endanger your life for reporting a story? How will Latin America be without free press? Or have we reached that point already?

Due to the new media law in Argentina (Ley de Medios); the threats to the press in Ecuador; the media nationalization in Venezuela and the kidnapping and killing of journalists in Mexico, among other cases, more and more journalists are recurring to self-censorship or on the contrary, to activism. Nevertheless, is the profession suffering?

In this conference, we will analyze the stand of the press in Latin America; how media has been adapting itself to globalization; and if journalism continues to be, for native reporters of these countries, “the best job in the world” as Nobel laureate Gabriel García Marquez used to say.

Puerto Rican journalist Natalia Bonilla will be in-charge of conference. Bonilla possess a B.A. in Journalism from the University of Puerto Rico, Rio Piedras Campus, and a M.A. in International Relations from the University of York. She is founder and editor of non-profit international affairs magazine Revista Latitudes and for two years she has been a columnist on world press issues for Periodismo Libre, a radio program of Puerto Rico Freedom of the Press Center.